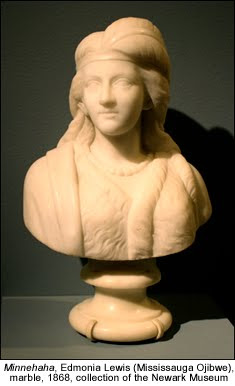 In Nancy Mithlo’s essay, she examines the role of Native women artists and stereotypes of Native Americans in her “an attempt to define a critical indigenous arts theory” (105).

Asking if negative stereotypes of Native Americans in popular culture matter, Mithlo answers, “Yes” – a view backed up by cognitive science. She sees mascots and other stereotypical caricatures of Natives as having real world ramifications, including violence; however, she argues that artists can use stereotypes as tools for cross-cultural communication, and cites examples of artists using the two most common stereotypes of Native women, the “squaw” and “princess,” to educate their audiences.

Mithlo points out that tribes and Native people themselves sometimes contribute to these stereotypes. For instance, the poster child of the "Indian princess" stereotype, the Land O’ Lakes butter maiden, was actually designed by Red Lake Ojibwe artist Patrick DesJarlait (Anthes 99).

Often non-Native’s ignorance of diverse tribes is blamed for the stereotypes; however, this has not proven to be the case, especially in areas where non-Native peoples are competing for limited resources with high concentrations of Native peoples (114). In the art world, this means when Native artists are designated by tribe and exhibiting in their own venues, such as Indian markets, prejudice is reduced; however, when Native artists seek to show their work in elite, mainstream environments, prejudice is more likely to occur. Mithlo provides several appalling examples of the backlash that occurs when Native artists exhibit in the mainstream arts arena instead of “knowing their place.”

Over and over the discussion of “segregation” of Native art comes up, but Mithlo puts things in perspective: why should the contemporary arts world be a place devoid of any ethnicity? It’s “an odd kind of segregational racism” (114). I think it’s important to hear about experiences from Latino, Black, Asian, and other artists and writers with similar experiences – they are also often directly or indirectly asked to downplay their own cultural heritage to “make it” in the mainstream.

“To talk about Indian art, you must talk about race,” (107) she writes, and “a negation of ethnicity also implies a negation of history.” Besides being an ethnic definition, “Native American” is also a political definition, with rights and access to resources relayed through citizenship in sovereign tribes.

The Native women Mithlo interviews discuss being part of a tribe – a communal approach to art making that flies in the face of the iconic mainstream Rugged Individualist Art Hero. Mithlo argues that in contemporary Indian art the communal aspect should take precedence over the individual. Instead of trying to separate the art and the artists from the fabric of their daily life or home, their “extended lives as mothers, tradition-bearers, and wage earners” are important components to examine in interpreting and appreciating their art (111). It is not that the artists Mithlo profiles do not express individually, but their work gains depth and meaning when seen in the context of their respective community circles.

However, many Native artists are clear that they cannot speak for their tribes; it’s a more nuanced matter of seeing the individual as a community member – in Diné artist Gloria Emerson’s words, "a case study, of what’s going on throughout the reservation" (111).

Mithlo admits, “Both the motivation to alter preconceived notions of the Native as well as the availability of counternarratives are strikingly missing from general discourse…” (121) Mainstream media and the global art world tend to simply ignore real Natives in favor of the stereotypes. Native artists in the mainstream art world defy preexisting categories and are therefore threatening and subsequently ignored.

"Native artists who move in both mainstream fine arts and rural reservation communities defy the dated analysis that strictly sees the tribal as separate in time and space from the modern. The concept of Native Americans as mobile, contemporary, and, simultaneously, tribal has not yet been recognized by the non-Indian public," she writes (121).

It is not enough to simply study the aesthetic qualities of Native art – to take the formalist, Modernist approach of the mid-20th century. Mithlo concludes, “To fully engage in Indian arts, one must participate in a fairly rigorous intellectual exercise in which personal doubt may productively serve to further one’s depth of understanding. Counterintuitive measures such as an embrace of stereotypes, generic Indian identity, and realism are reasonable places to start the difficult process ahead” (123).