The two major annual, competitive art shows are coming up. Both are great opportunities for emerging Native artists to showcase their work and are free to enter.

The 41st Annual Trail of Tears Art Show takes place at the Cherokee Heritage Center in Park Hill, Oklahoma. This year the Chickasaw Nation is the primary sponsor of the show. It's open to all members of any federally recognized tribe, pueblo, or Alaskan village, over the age of 18. Categories are painting, graphics, sculpture, pottery, basketry, and jewelry. Digital images of entries should be emailed to Mickel-yantz (at) cherokee.org (ignore what the rules pdf says; the cherokeeheritage.org e-mails don't work anymore). Accepted entries will be posted on March 21. The show runs from April 8, 2012 to May 8, 2012.

A pdf entry form and rules can be downloaded here.


The 44th Annual Red Cloud Indian Art Show takes place at the Red Cloud Heritage Center and Museum in Pine Ridge, South Dakota. This show is open to all members of US federally recognized tribes, as well as Native Hawaiians and First Nations and Inuit of Canada. Divisions are painting, drawing, graphics, photography/computer generated art, mixed media, three dimensional, and contemporary or traditional cultural items, such as beadwork, quillwork, musical instruments, textiles, and clothing. An email or letter stating intention to enter that show must arrived by May 1, then entries must be delivered by May 11. The show runs from June 3 through August 12, 2012.

An entry form and rules can be downloaded here.

There's actually a third, annual intertribal show. The Cherokee National Holiday Show, sponsored by the Cherokee Nation, in Tahlequah, Oklahoma over Labor Day weekend is actually open to all US federally recognized tribes; however, I'm not sure they are equipped to receive and ship artwork out of the region. Check this website closer to the date for more information.
Posted by ahalenia at 5:27 PM No comments:

The weather for this year’s Heard Fair was perfect. Cool and calm, which set the tone for the weekend. Comparisons to SWAIA’s Indian Market are inescapable, and the Heard is much more relaxed, genteel affair, being affiliated with and taking place on the grounds of the Heard Museum. Due to the accessibility of Phoenix, being a major hub for air travel, the Heard draws proportionally more artists from farther regions, especially Alaska, than Indian Market, which has a specific focus on southwestern/ Oasisamerican tribes. I wonder, though, how many non-artist visitors travel into town for the weekend or if the main draw is from residents of the Phoenix metropolitan area?

For some reason I have a strong desire to understand how the fair, the museum, and the Phoenix art scene tick, since it’s clearly very different than New Mexico or Oklahoma. Native Peoples Magazine and Southwestern Art Collector cover the fair. The Arizona Republic ran a preview in February saying that 20,000 visitors attend the fair, garnering $200,000 in proceeds, which makes the fair the Heard Museum Guild’s largest annual fundraiser. The article confirms that the number of artists, expanded last year, is still 700. Perhaps the expansion was made for financial reasons for the Heard Guild, but the number of artists seems to overwhelm the space, and certainly the facilities.

The Heard does a fantastic job getting through own information out through the Heard Guild’s and the Heard Museum’s websites museum store’s and Berlin Gallery blogs, twitter, and other social media. I found out who the Grand Prize winner was when my friend from Tahlequah posted it on Facebook.

Stetson Honyumptewa (Hopi) won Best of Show with his action-packed, intricate, and humorous carving, “Techno Kid on the Run,” which, to the best of my limited understanding on the subject, features Wiharu, the white-faced ogre, attacking a misbehaving youth.

Classification winners include Samuel LaFountain (Diné/Ojibwe, from New Mexico) for Jewelry and Lapidary; Anita Fields (Osage, from Oklahoma) for Pottery; Micah Wesley (Kiowa/Muscogee Creek, from Oklahoma) for Paintings, Drawings, Graphics, Photography; Stetson Hunyumptewa (Hopi, from Arizona) for Wood Carvings; Ryan Benally (Diné, from
New Mexico, born in Arizona) for Sculpture; Catherine Blackhorse (Seminole, from Washington) for Textiles, Weavings, Clothing; Dyanni Hamilton-Youngbird (Diné) for Diverse Art Forms; and Jeremy Frey (Passamaquoddy, from Maine) for Baskets. Each category had three judges, except Wooden Carvings and Sculpture, which were combined, for a total of 21 judges. I’ve never heard an estimate of how many of the 700 artists enter the competition.

Entries must be delivered by 5pm on Thursday and can no longer be mailed in due to widespread damage to works in shipping (or so goes the word on the street). Judging takes place that evening. The Heard doesn’t have a ceremony to announce the winners, but by the time the dinner and Best of Show reception, which are quite wonderful, takes place, visitors are treated to a printing listing of the winners and brief biographies of the judges. 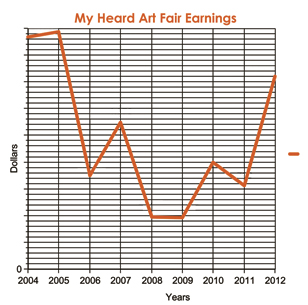 Good news about the economy flooded the airwaves in days leading up to the fair. This, like all other markets, is a jeweler’s market. I would love to see an overview of who was buying what. Some new artists did extraordinarily well. Many established artists whose work I have the utmost respect for sold nothing all weekend. Many veteran artists didn’t attend due to the economy, and several others said they couldn’t return next year. Even if you want to attend, the expenses are steep and it’s just not feasible, even if the event is enjoyable. Since I quizzed so many friends about how their market went, I made a chart to show the ups and downs of my own sales at the Heard.

The Heard used to permit artists to sell two reproductions in their booths but ceased. Unfortunately many fairgoers can’t afford major original works. The prints and note cards were the artist’s gas money. While a booth entirely of reproductions isn’t desirable, allowing two reproductions would not lower the quality of the market; and certainly not as much placing as a kettle corn booth across from an art booth.

The courtyard at times was swarmed, as was the museum store and bookstore. Several authors were honored at the event. A variety of musicians and dancers performed, including Navajo flautist R. Carlos Nakai. In the Berlin Gallery, Sarah Sense (Chitimacha-Choctaw) signed copies of her newly published catalog, Weaving the Americas, which documents artists she interview on her travels through North and South America.

People from the Heard Guild do definitely take care of their artists. The dinner reception was, as always, really wonderful, as was Native Peoples party. Thanks so much to Jose and Frances for their annual parties. And thanks to my two major artist collectors who like to fly under the radar! Maybe next year I’ll finish up my painting before the weekend and actually get to see some of the art shows around town again.

Posted by ahalenia at 4:51 PM No comments: