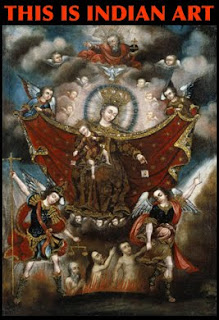 Hello and welcome! I created this blog with the goal of making Native America art writing and art history more accessible to a wider audience, especially indigenous artists. Is Native American art a small, recent addition to the art world? Absolutely not. Native American art extends back at the very least 13,000 years and spans two continents—from the southernmost people in the world, the Yaghan of Tierra del Fuego, to the Inughuit of Polar Greenland, the northernmost people of the world. The Native art world is older, newer, richer, and stronger than art literature has yet been acknowledged. I support a hemispheric approach to Native art, because cultural exchanges constantly happen between North and South American, and have for centuries — after all, where did tobacco originate?

Many exciting developments are happening in the Native art world — new institutions, new scholarship, more and more Native peoples earning higher degrees are publishing. The theoretical framework may not yet in place to make sense of the dizzying diversity of Native arts, but that should not hold anyone back from appreciating the amazing works from the part and present and making contributions towards an indigenous art theory that can encompass all Native arts, not just the most Westernized.

Hybrid artists tend to get written about when the critics or the audience is non-Native, but we should also celebrate those artists who provide art for their own tribes, especially those artists whose creations are used in our ceremonies, dances, and community events. An art theory that ignores traditionalists and the core people that hold our tribes together is not a Native American art theory.

For those Native artists whose chosen audience is the non-Native art world, perhaps they can find allies among historical theorists and writers of the Western art canon, such as Ferdinand Saussure, Herbert Marcuse, or André Malraux, and present their art within these people’s theoretical context? It’s a matter of providing familiar ground that the audience can relate to, much in the same way many Native painters employ pop iconography as an entré for non-Native people into the work.

Many institutions in the Native art community are governed by people who simply do not have an art background. So a great deal of discussion about Native art is governed by hand-me-down notions of art that have been abandoned by Post-modern art institutions in the last few decades. We do not live in the Modern Era — that ended over a half century ago, so there’s no need to try to hamstring Native art today with outmoded ideas of universality, formalism, or Eurocentricism. 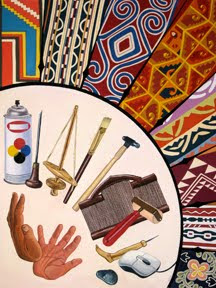 Above all, it’s good to remember that art is subjective. We’re all going to have wildly different views, but this diversity of opinion, experience, and perspective makes for a richer dialogue about Native arts. I’m going to strive to present artists who are off the beaten path, including artists who have found success outside of the gallery and market framework. Any writing or information about Greenlandic or Latin American indigenous art would be very welcome!

To get things rolling, I have summarized the different essays in [Re]inventing the Wheel: Advancing the Dialogue on Contemporary American Indian Art, which presents many of the dominant themes and obstacles with which Native art writers are currently wrestling.

A note about images: Images that appear on this blog are either ones that I hold the copyright to (my own art or photographs) or are public domain or have Creative Commons or GNU licenses obtained from Wikimedia Commons or Flickr. Any copyrighted images from other artists will limited to those reposted with permission or are part of a review (Landes 6). Images in art show reviews fall under the doctrine of fair use. The site will fully comply with international copyright laws.

America, very well written. I agree that the importance of the hemispheric approach cannot be overlooked. So much was/is traded among our tribes, and all of it eventually winds up on canvas, pot, basket, bandolier bag, DVD, etc. Thanks for starting this blog. Is it possible to receive email notification of updates? Or did I just overlook that in the choices?

Thanks... I'm fascinated by the fact that some Amazonian tribes play chunkey even today. I'm still figuring out blogspot but will try to add email update options. Cheers, A

It's a beautiful blog. I look forward to visiting and sharing in the future. Thanks America - Roy

Lovely Meredith, Good for you, your always coming up such interesting projects. Thanks for including me, back to pushing the brush. Gina Gray

this is exciting! In 1981 I gave a paper at the Native American Arts Conference @ UNM, entitled "Anglo Perspectives in Native American Art" taking aim at what passed for 'insightful' Indian art critiques. The environment is much improved from then, as is evidenced by your blog.

Still figuring out this system! Guess you can't edit comments once they are posted.

Thanks for the positive comments. Now there's so much good material being published about Native art, it's impossible to keep up — so the challenge is to synthesize it all. I guess I'm concerned that much of the dialogue occurs in the sphere of Western institutions. While some art writers try to convey Native art theory to Western art establishment (a much needed effort), simultaneously tribes and individual Native artists should strengthen and support their own institutions — artists' groups, art spaces, tribal museums, tribal art education programs. It's exciting to see what's happening now — the Saginaw-Chippewa's Ziibiwing museum based on the Seven Teachings — Sinte Gleska Univesity's Great Plains Art Institute teaching college courses in Lakota aesthetics — etc. etc.

Please feel free to bring up any projects or people that you'd like to call attention to.

I am so happy to have found this blog. Thank you so much for starting it and I wish you a long and happy bloghood.

I would like to 2nd the request for a way to get your posts (in addition to comment followups) by e-mail.

Have finally figured out email subscriptions and that option has been successfully added to the blog. Thanks so much for your interest!