Inner Demons III Explores the Uncomfortable and Unsettling through Art

Santa Fe, NM — Inner Demons III, opens with a reception Friday, Oct. 28th, from 6 – 9 p.m. at Ahalenia Studios, which has a new location at 2889 Trades West, Unit E, off of Siler Street. Celebrating its third year in what has become and annual show, Inner Demons III explores and encourages art that is dark, moody, and morbid (or otherwise disturbing in its subject matter) with an eclectic line-up of artists. This event is free and open to the public. Because of its proximity to Halloween, costumes are welcome at the opening.

Show website: www.ahalenia.com/demons.
Posted by ahalenia at 10:16 AM No comments: 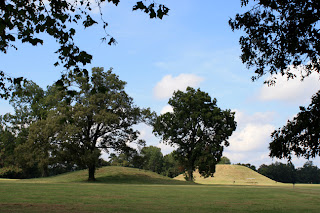 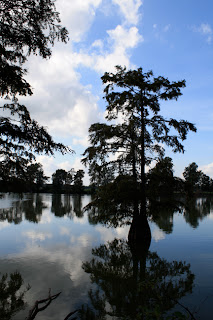 Digging for a swimming pool in a segregated African-American park in 1938, the Civilian Conservation Corps unearthed precolumbian artifacts from a Mississippian mound complex. The University of Tennessee investigated the site, which showed evidence of human occupation dating back to at least to 1000 BCE. The town site dates back to 1000 CE and was alternately abandoned and rebuilt. The main occupation dates from 1400 and was thought to be abandoned by the 1541 arrival of Hernando de Doto in the region (CH Nash Museum).
The name "Chucalissa" means "abandoned house" in Choctaw (Visitor's Guide 2). Today the site is west of T. O. Fuller State Park, and it's difficult to believe you're still in the city of Memphis, surrounded by towering forests on all sides, and a nearby power plant. ("What is it with mounds and power plants?" commented Linda.) The CH Nash Museum has an extensive collection of artifacts from the site on display, and their signage ties in the African-American history of the area. Signage is geared toward children, making the site and lifeways of the people who lived there directly relevant to the visitors. Recently added panels show input from Choctaw and Chickasaw tribes. Perhaps the interpretive materials here are some of the best because instead of exoticizing the precontact residents of the site, they humanize them.

A replica village of high-pitched thatched-roof huts was torn down from the site for not being sufficiently accurate to the originals, but photos reveal that they look as good as any found in other sites.
The main platform mound dominates the site. The front is covered by concrete, which ironically, gives more of a sense of what the mound looked like in its heyday, since most mounds were sealed in red or yellow clay. Built between 1350 and 1600 CE, the 25-foot-high mound measures 150 feet long at its base. Postmold evidence reveals that two 50-square foot buildings once stood on the platform's surface (Visitor's Guide 6-7).

Across the large plaza, where demonstration stickball games are still occasionally played, sits a residential ridge mound and the smaller and older platform mound, worn down by plowing. The site also features the obligatory dugout canoe and herb garden. Plant signage features the pawpaw, an important source of food and textiles, and sassafras, important for teas and medicine. Near an employee's house is a prodigious stand of river cane, Arundinaria.

Contemporary tribes thought to have ancestral links to Chucalissa during its different occupations include the Choctaw, Chickasaw, and Quapaw.

The two-thousand-year-old Middle Woodland site, Pinson Mounds has my vote, hands down, for the creepiest site we've visited. This is probably due to the rain, the mist rising from the forests, the echoing insect calls, or the incised human skull rattles found on a male burial and on display in the museum. Built near the southern fork of the Forked Deer River, Pinson Mounds were constructed from 200 BCE through the 400 CE (Mainfort and Kwas).

Pinson is part of the Miller sub-tradition, a precolumbian culture that settled along the Tombigbee River in western Alabama, northeastern Mississippi, and western Tennessee, that flourished from 250 BCE to 550 CE (Peregrine and Ember 327). The Miller diet featured hickory nuts, goosefoot, maygrass, deer, turtles, fish, and shellfish (328-9). Miller peoples were part of the Hopewellian exchange. Many of the ceramics interred at Pinson were imported from throughout the southeast, while some of the Pinson stone artifacts came from as far away as Ohio (328, 333).

Pinson contains possibly 30 mounds, including five platform mounds. Unlike later Mississippian mounds, these early mounds have no conclusive evidence of buildings on their surface (328). Only three of the mounds were burial mounds; one of these being the Twin Mounds (Mainfort and Kwas). Few people are believed to have lived at the site; instead, it was a ceremonial center for the region (Peregrine and Ember 333).

At 72 feet tall, Saul's Mound, or Mound 9, is the second-tallest mound in the United States. Currently by trees and foliage, the mound is actually rectangular, with the corners corresponding to the four cardinal directions.

The park's museum is quite large and resembles a mound on the outside with turf-covered earth shored on its side. I can't help but think this architecture is genius and must help with their heating and air conditioning bills. They have an extensive collection of pottery, lithic tools, a dugout canoe, and other artifacts. The outside of the museum is covered with yucca plants, which seems incongruous, but as I found out, Yucca filamentosa is actually common throughout the south, growing as far east as Virginia.

As we drove away, we passed the amusing site of a flock of wild turkeys foraging on a mound, which lifted some of the creepiness of the site.