Today, things became more unpredictable. We naïvely followed the GPS, past cottonfields,  through a burning field of sugarcane, past semi-suicidal dogs, to a gravel road, to a rutted dirt road in the thick woods for miles until reaching an extensively (mostly) abandoned settlement of shipping containers and trailers on metal slits straight out of the worst '70s horror movie, before beating a hasty retreat. 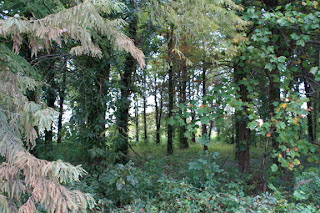 We visited Winterville Mounds north of Greenville, Mississippi. Until last week, I'd never even heard of the site, but at one time it boasted 23 mounds around two grand plazas, surrounded by settlements of farmers. Built around 1000 CE by ancestral Choctaw and Chickasaw peoples or possibly relatives of the Natchez, Winterville Mounds has a protected park and museum with twelve of the mounds, most of which have never by excavated (MDAH).

Archaeologists believe that only elite families lived in the mound complex, many of which form an oval around Mound A, which towers at 55 feet even today (MDAH). Another mound, almost as tall, is completely surrounded by woods. A major fire burned the complex in the late 14th century, and it was abandoned by the 1450s (MDAH).

I love the architecture of the museum, with earth shored up around the sides. This construction would make so much sense in the windy Plains, where the earth would stabilize interior temperatures. On display is a fantastic photo of cows saving their lives from the 1927 flood by standing on the top of Mound A. This brings the possibility to mind that one reason for mound building might not be status but the practical purpose of preserving temples and sacred items from flooding, which would have been more prevalent during the Mississippian era, with its heavy rainfalls and lack of levees and dams.

Having seen thousands of Mississippian artifacts in museum collections, it's exciting to see the environments these art works and tools originated — lush with oak trees, bald cypress, sumac, frogs, butterflies, dragonflies, and turtles. One word of warning, if you visit this site, get bug spray or boots because the little black ants sting like crazy.

Poverty Point
Much much ancient than the Mississippian mounds, Poverty Point has arrowheads dating back over 10,000 years. The complex earthworks date back to 1600 BCE. Mound A, an effigy mound that once formed the shape of a bird, was the largest mound in the Americas when it was built in 1400 BCE. Even today it still has over 90,000 tons of dirt. There's no evidence of structures on the top of the mound (PPSHS).

Mound B was a platform mound that has been mostly excavated. There's no evidence of buildings on the mound.

The site is defined by six concentric semi-circles of earthwork embankments, that were once five feet high, that enclosed a central plaza and face the Bird Mound. It's been suggested that houses sat on top of these ridges. This elaborately planned architecture predates agriculture. The Poverty Point people were hunter-gatherers, and they built on the site between 1600—700 BCE.

Thousands of variously-shaped clay blobs have been found at the site. Called Poverty Point Objects or PPOs, they were heated and put into cooking pots. I don't think they'd be difficult to make; it'd be interesting to try to cook stew with them.