This southern Mississippian settlement is second only to Cahokia in size. Moundville was built and occupied between 1000 to 1450 CE (MAP). Mound A sits in the center of a large rectangular plaza. This was clearly a stratified society but we had to laugh at all the various mound museums' signage which repeatedly emphasis the "elite" nature of the societies.

The recently renovated Jones Museum was first built in 1939 and combines art deco and Mississippian architectural elements in a way that I hope enjoys a revival and grows in popularity. Wouldn't it be cool if the town of Moundville, Alabama decided all new construction should be in the Neo-Mississippian Deco style? The skull and bone friezes comes from ceramics found at Moundville, while the wooden columns carved as birds resemble intact wood carvings pulled up from muck ponds in Florida.

The museums have extraordinary relics on display, many on loan from the National Museum of the American Indian. It's good to see the artifacts in the location in which they were created. 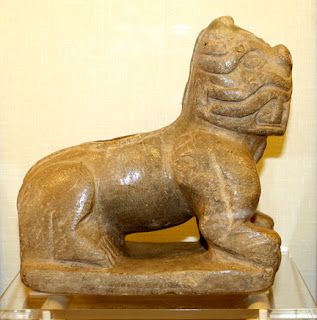 When I first saw a Mississippian feline pipe at the National Museum of Natural History's collections, I thought it had been misplaced from the Asian collections. The Florida panther, a subspecies of Puma concolor once lived in Alabama, and bobcats, Lynx rufus, are still common in the state.

The displays are flashy and attractive but far too speculative for my tastes. For instance the wall text states that Moundville religion was obsessed on death and the afterlife. Images of uktena and hand-in-eyes are presented as "death" imagery. If people studied contemporary American culture exclusively based on digging up cemeteries — the burials with fine clothes and jewelry, in elaborate coffins, and the extensive engraved stone sculptures marking the graves — they might think Americans were completely devoted to a death cult as well.

The mannikins and people portrayed in wall murals simply did not look like Indians. I thought the image of the bride being carrying on a litter to her husband was a bit over the top, but then discovered the Theodore De Bry engraving, A Bride Is Carried to the Chief, published in 1591, which no doubt inspired the scene.

Nonetheless, the museum had gorgeous pieces. I kept look at the labels to see if they were replicas, but they weren't. From October 5th to 8th Moundville with host its annual Native American Festival, featuring artists, performers, and educators and sounds like a major event. I'm curious to know which artists participate. The park also hosts gatherings of flintknappers.

The people thought to have built Moundville are Upper Creeks belonging to the tribal town Tuskegee, called Napochi in one early chronicle, who were Upper Creeks, members of the Muscogee Creek confederacy.

For more information about our trip, please visit Exploring the Ancient Southeastern Woodlands.
Posted by ahalenia at 7:43 AM