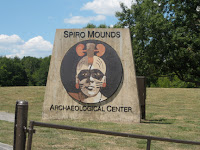 Spiro Mounds in LeFlore County in the Choctaw Nation was our first stop today. The weather was perfect, the clouds rolled in, and butterflies and ladybugs dotted the gorgeous landscape. Lind and I were happy to have Nuket Duman and Joseph Erb join us in hiking through the site. We’re incredibly glad that the site was open on a Sunday and that Dennis Peterson answered my battery of questions.

Spiro Mounds was a Mississippian ceremonial site that flourished from 850 to 1450 CE but was occupied before and after. This ceremonial center containing at least twelve was built by the ancestors of the Caddos and Wichitas, especially the Kitsai, who are today enrolled in the Caddo and Wichita tribes (Watkins 155-6). At its height, its population was about 7,500 with more outlying settlements.

Spiro never had major defensive structures and no evidence of major warfare. It was the major western center in the Mississippian world and was linked to a continental trade routes. Olivella shells from the California coast have been found there. It is notable for having the widest range of shell carvings, dippers and gorgets carved from Busycon contrarium or the lightning whelk shell imported from the Gulf Coast and Florida. Designs are highly elaborate and many are not repeated elsewhere. The dippers were used for serving ceremonial medicine, such as black drink. The gorgets were worn around the neck. The distinct iconography, which forms a visual language used through the southeast, has been widely debated. I would love someday to see an intertribal gathering in which oral historians share their interpretations of the imagery to compare to the interpretations from the archaeological community.

Beginning in the 1830s, Choctaw freedmen settled and farmed around the site, and one family in particular tried to protect them mounds. Unfortunately family members leased the land to the Pocola Mining Company in 1933. Those pothunters pillaged the mounds, selling items and burning others. They even burned human remains they unearthed from their graves. The State of Oklahoma finally passed legislation to protect the site in 1935, and in 1936 the University of Oklahoma and WPA workers started a scientific excavation (Peterson).

As Oklahoma’s only archaeological site open to the public and one of the richest archaeological sites in the US, the museum is grossly underfunded. It seems that Oklahoma would want to promote tourism to the site, and the first step would be putting up signs on the roads leading to the site. Seriously, even spray painted wooden planks would be of great assistance to travelers!

Great piece, America. Having visited Spiro several years ago, I agree that the signage needs improvement. I also believe that there needs to be more study of the iconography. mkb

Actually there is a two volume publication on the archaeology and iconography by the expert, Dr. James Brown that was published by the University of Michigan. The Spiro Ceremobial Center, 1996, Memoirs of the Museum of Anthropology, UM. Vol 1 and 2

Thank you so much for your work here. It is deeply appreciated.

Rebecca, are you thinking of Pre-Columbian Shell Engravings From the Craig Mound at Spiro, Oklahoma by Phillip Phillips and James A. Brown. That's an amazing resource.

I would like to thank you for posting this America. I think it is the most up to date mention of that special place in Ok. History. The State Website doesnt even keep up to date. Dennis, at Spiro, waited many years to get help in updating the Museum there.

I was given responsibility of designing and renovating the room and the sign in front of the museum. Dennis is so dedicated and patient.

Our exhibit team did all the work inside, "IN HOUSE", with very little funding and while working on many other projects. That team consisted of 5 very dedicated people and Dennis of course. Design, art, graphics, and build.

Unfortunately funds in Oklahoma are mostly contributions from "friends" groups locally. Very little comes from Govt. funding unless it is a matching grant etc. We fought hard for signs with little success. Most all Oklahoma Sites are that way. Very self defeating, but when something gets done we feel extremely proud.

Thanks for sharing. I would love to see Spiro be better funded. The kite festival in particular seems like such a wonderful event to reach out to the local community, especially children. Please feel free to post any fundraising campaigns Spiro develops here.