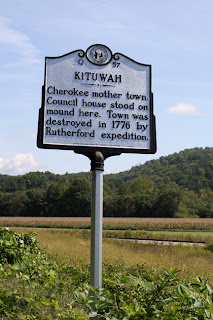 Kituwah, also spelled ᎩᏚᏩ and Giduwa, the mother mound of the Cherokee, was easily the most active mound site we visited. At only five feet tall, the mound not easy to locate, but the Eastern Band Cherokee posted signs marking the entrance.
Several times we've asked locals for directions to mounds, who came up blank—only to discover they lived within a mile of the mound. Seeing how many signs were up and how many activities happened at the mound, I find it amazing how a neighbor down the street had never heard of Kituwah.

The mound, located near a fork in the Tuckasegee River, contains the sacred, eternal fire (Pluralism). Kituwah is the location where God gave the sacred fire and laws to the Cherokee people (Curry). The site was a village that was razed by British soldiers in the late 18th century. The Cherokees lost the mound in a land cession treaty with the United States in 1823. In 1996, the Eastern Band of Cherokee Indians successfully purchased the mound and surrounding lands. In a ceremony in 1998, Cherokee children began rebuilding the mound by adding a small patch of red dirt (Pluralism).

Archaeologists believe that Kituwah has been occupied for 10,000 years, and at one point 200 people lived on the site (Pluralism). Noninvasive archaeological studies, using a gradiometer which measures magnetic fields, reveals numerous hearth sites within the mound, including a large central hearth, around which a ceremonial building was rebuilt every 20 years since the 15th century. Test holes have revealed 15 burials on the land, with the possibility of many more. The Eastern Band promises no major excavations will disrupt the mound in the future (Pluralism).

Some frankly shocking proposals for development of the mound site have been put forward, even from members of the tribal council (Pluralism). Currently there's a Cherokee children's garden and a substantial amount of corn cultivation, which seems appropriate use of the land. The tribe and local community successfully fought the construction of a major Duke Energy power substation in the area, so hopefully they will be successful in keeping the sacred site intact in the future.

Very nice photos, I have some very similar that I took this year while in the area for the Talking Trees Trout Derby. I first vistied the mound at Kituwah about thirty years ago, a local man told me of it's location. I enjoy photos and posting them on web sites. I am a Geocacher and a Waymarker, and I enjoy the sites because they tell about and bring me to places that I would otherwise never know about. This site is very dear to me, and I feel connected to it. I brought my son here to see this great mound, or what is left of it anyway. We also made a stop by the McMahan mound in Sevierville, Tennessee on our way to Cherokee, North Carolina. Very beautiful here.

Very good blog! Do you have any helpful hints for aspiring writers?
I'm planning to start my own blog soon but I'm a little lost on everything.Peluang Bisnis Modal Kecil
bisnisr kreatif
ide bisnis

Lots of information and benefits that I can take from your writing.
I hope that in the future it will get even better and better, so that everyone can get a lot of information here.

Lots of information and benefits that I can take from your writing.
I hope that in the future it will get even better and better, so that everyone can get a lot of information here.