Meta-Criticism: Responding to the Response to the Tipi: Heritage of the Great Plains at the Brooklyn Museum, Part One 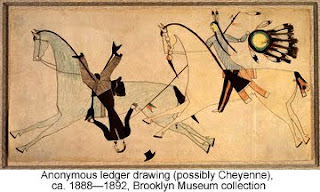 New York is arguably the center of the art world, and the Brooklyn Museum’s exhibit, Tipi: Heritage of the Great Plains puts Native art, both historic and contemporary, in crosshairs of mainstream art writers. That it received so much attention from art writers is a coup for curators Nancy Rosoff and Susan Kennedy Zeller. However, the quality of much of the writing leaves something to be desired.

I’ll begin with Ken Johnson’s New York Times review of Tipi: Heritage of the Great Plains, as it stands out as the most flippant and dismissive. He approves, albeit condescendingly, of the historical works but disregards the “kitschy pieces” by living artists.

Johnson’s critique opens with, “You know there’s trouble when the first object you encounter in a museum exhibition looks as if it had been misplaced from the gift shop.” The art piece to which Johnson refers is 21st Century Traditional: Beaded Tipi, a miniature tipi by Teri Greeves (Kiowa-Comanche-Italian), which he describes as “cartoonish” and “cheerfully saccharine.” Art is subjective and certainly he has no obligation to like the piece, but if it’s a true critique, the description should be accurate. The tipi, commissioned by the museum of the show, stands 46” tall and is made of brain-tanned deer hide, various seed and bugle beads, silver, pearls, raw diamonds, copper, cotton, rope, pine, poplar, and bubinga, a tropical African hardwood (Rosoff and Zeller 35). Kitsch refers to work that is cheap and mass-produced; this is a labor-intensive handmade piece with precious and semi-precious materials.

The beaded imagery is celestial (sun, morning star, and moon), zoomorphic (three buffalo), and various Native figures – faceless adults and children, a drum circle with microphone, and dancers. Nothing particularly screams “saccharine” — the palette is bold with the only pastel color being sky blue. Perhaps the imagery of adults holding or walking with children is too sweet? That’s a sad state of human affairs is that is the culprit. Otherwise, the “fault” must lie in the diminutive size of the piece. The art world is rife with size queens.

Johnson writes about the tipi, “the object has a relationship to the historic material that is perplexing at best.” Sorry, the relationship is painfully obvious and the title even underlines the point. The figures are all Plains Indians in 21st century dress—some Kiowa, some intertribal—and the piece shows that songs, dances, familial relations have maintained continuity over the centuries, as have Plains peoples relationships to celestial forces, despite changing technology, as exemplified by the microphone. Miniature tipis have an historical antecedent as young girl’s toys, but in the 20th century, they have increasingly been commissioned by museums. Just as the tipi is portable, the miniature tipi is a portable expression of Plains culture. The piece is upbeat, but that is part of the message: Kiowa people are alive and have much to celebrate. Greeves’ art statements are included in the labels and wall text; however, none of the art writers referred to these texts. 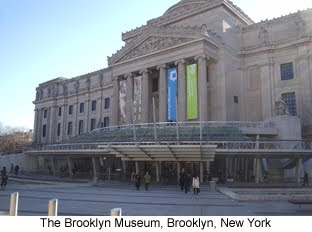 Thanks for this well informed and much needed response. The impact of indigenous art and culture on modern art has barely been acknowledged. The "Ab Ex" show at MoMA almost forgot that in 1941 it mounted "Indian Art in the United States" which was attended by probably all the major NY School painters. Pollock was inspired by Navajo sand painters and now we have evidence that Rothko was attending Hopi ceremonies as early as 1938.
Noah G. Hoffman
Director
Mark Rothko Southwest History Project

Thanks Noah! Twig Johnson of the Montclair Museum has made great strides in bringing awareness to Native art's influence on modern artists. Good luck with your research on Rothko.

Curator Nancy Rosoff just about wrote her views about this critique on the Brooklyn Museum's blog: "A Response to NYT’s “Plains Indian Culture, as Seen Through the Ingenuity of the Tepee".

Thanks for your insights. I quoted and linked your blog in my thoughts on the review, which wound up being my third consecutive entry on American Indian art: http://scottseesthings.blogspot.com/2011/03/dances-with-high-heeled-sneakers.html

Excited to say just witnessed a work by a Wampanoag artist at PAAM (Provincetown Ass. and Museum)that not only shows that the Indian artist is alive and producing but is expanding the limitations of the art world as we know it. "F...ing the King of Cape Cod"
is unusual and seminal for it belies John Molyneux premise in "Art vs War" for the artist uses art as his weapon in his tribe's conflict with the state.