For thousands of years, indigenous people created and evaluated art according to our own standards. In the last few centuries, non-Native people have collected, critiqued, categorized, and theorized about Native art to such an extant, that in some venues they temporarily drowned out Native perspectives. Fortunately the tide is turning, with more tribes establishing their own museums, more Native peoples curating their own art shows, and more Native writers contributing to the canon of Native American art history. One window into historical indigenous perspectives on one genre of art can be found in Plain’s women’s quilling societies.

While warrior societies among Plains tribes are well known, many tribes also had artistic guilds. One such guild was the quilling society, which was the most prestigious women’s society among many Plains tribes. Specifically I want to look at the Cheyenne women’s quilling society. The Cheyenne name for their quilling society was Mëëno’istst , which meant “quiller”–specifically “one who applies quills to hide”. Eme e ni means “she sews on quills” (Grinnell 160). The women who belonged to the society were known not only for their artistic skill but also for their moral standing (Western History Association 6).

Quillwork, the aesthetic use of porcupine quills on textiles, hides, and other surfaces, is an art form unique to North America. Quillwork has been popular from coast to coast, taking hold throughout the range of the porcupine. The earliest examples of quills used as binding agents were found in caves in Utah and Nevada, dating back to 530 BCE, and the oldest quillwork found on moccasins date back to the 6th century CE (Palmer 75).

My incomplete understanding is that a cultural hero named the Buffalo Wife first brought the art of quilling to the Plains tribes. Picking Bones Woman, a Cheyenne told the story about Buffalo Wife to anthropologist George Bird Grinnell, and she describe the human man who married Buffalo Wife. This man learned quilling while living among the buffalo. When he returned to Cheyenne society, he created the quillworkers’ society and instructed the women in the sacred protocol of quillwork (Grinnell 163).

The quilling society was an intergenerational institution, with older women instructing younger women. “Not only were the quillwork guilds instructional, but they embodied a religious element as well, not unlike a sisterhood. To join this prestigious society was to assume a station of respect and power” (Her Many Horses and Horse Capture 9). Women created other art forms, which had their own societies, but quillwork was considered the pinnacle of women’s artwork (Williams 70).

The accomplishments of quillers were on par with battle honors among men’s societies (Grinnell 159). As Beatrice Medicine and Patricia Albers write, “[T]he contributions of women were recognized by the Plains peoples, even though they have not been so recognized by anthropologists and art historians. Excellent in craftwork brought prestige and wealth to the woman and to her family” (Albers and Medicine 109). The artist had a place in Cheyenne society.

When the women decided upon a quilling project, a specialized camp crier would publically announce their plans to the whole camp (Grinnell 160). Quills had to be harvested, dyed, and processed. They were softened with saliva and pulled between teeth to flatten.

To protect the robe while it was being quilled, a woman would covered her hands with white clay or burnt gypsum (Grinnell 164). If a woman made a mistake when quilling, a ceremony had to be preformed, in which a brave man counted coup on the robe being quilled. The man would say, “And when I scalped him, I did it in this way,” as he cut the errant quills from the robe with a knife owned by the quilling society (Grinnell 166). 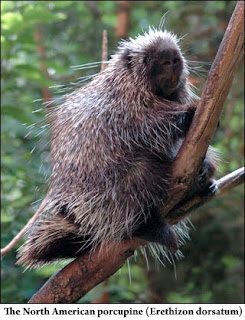 To ensure success of a relative or to health someone in ill health, a girl or young woman could create a quilled robe for a healer, religious leader, or warrior in a specific ceremonial manner. The girl would offer a gift to an elder member of the quilling society and ask her help in the project. The elder would respond with a particular ceremony and then she would instruct the girl. Upon successful completion, the girl could attend quilling society feasts and teach others the techniques she learned (Grinnell 160).

At certain gatherings, women would recount the quilling accomplishments, which would be attested to by a witness or said over an arrow or pipe (Grinnell 162).

The elder members of the quilling society “had strict rules in their designs and they kept secret the meaning and arrangement of the colors, as well as the relation of the designs to each other,” as Rodolphe Petter wrote in his 1915 Cheyenne-English Dictionary.

When preparing to quill a hide, a woman might ask an elder to visit her lodge and draw a design on the robe with a stick and white clay, for which she would be given a gift or clothing and food (Grinnell 163).

As Petter wrote, “The designs were always symbolic and talismanic, representing concrete organic objects, whereas the color were more emblematic of the abstract in creatures and creations, e.g., white for active life, very light blue for quietness, peace, serenity (from the cloudless sky); green for growing life; red for warmth, food, blood, home from blood); amber yellow, ripeness, perfection, beauty (from the sunsets); black for cessation of enmity, hostilities (from a dead glow being no more hot)” (Grinnell 168-9).

It’s intriguing that genres within quilling fell into a strict hierarchy. Woman began quilling moccasins, then cradleboards, stars or circular disks for lodges, buffalo robes, then finally lodge linings, backrests, and “possible sacks” (Grinnell 161). Those who completed these increasingly prestigious items increased their own prestige. Quilling an entire lodge by oneself was a great accomplishment but the highest accomplishment was quilling thirty complete buffalo robes. Doing so guaranteed the quiller a “long life full of good fortune" (Neithammer).

The quilling society came to an end in the late 19th century (Her Many Horses and Horse Capture 9), after the Southern Cheyenne relocated to Indian Territory and the Northern Cheyenne moved onto their reservation in Montana. However, quilling itself never died and has never been completely replaced by beadwork.

“Sacred protocol” and “moral standing” are not exactly common art terms today. It’s interesting to consider how many community members were involved in creating quillwork, or repairing it, or celebrating its creation. Wealth was tied to art before the reservation era, as was prestige; however, the nature of wealth is different in a reciprocal society than in a capitalist society. The Cheyenne quilling society is an example of how certain artists were perceived by a tribe and how their work strengthened relationships within the community.

For Cheyenne art in the collection of NMAI, including quillwork, click here.
Posted by ahalenia at 12:45 AM