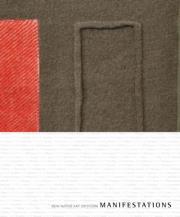 Manifestations: New Native Art Criticism, the culmination of three years’ work, is finally available. This book is part of the Institute of American Indian Arts’ “Vision Project,” an effort to showcase Native American art writers and new artists, through discussions, writing, and a series of solo exhibits at the Museum of Contemporary Arts (former IAIA Museum). The project involved 21 Native art writers and 60 artists.

What I witnessed of the process of the Vision Project was painful to watch, but, nonetheless, the results are inspiring. A committee chose the artists, selecting living artists, established, mid-career, and some emerging artists, who were active last three decades.

Only artists from Canada and United States, including Hawaii, were chosen. Why? Perhaps it’s an Anglophone bias, one certainly found in Canadian and United States academia but one that doesn’t conceptually hold any water. James Luna (Luiseño/Mexican), Mario Martinez (Yaqui), and Jennifer Vigil (Diné/Latina) represent the Americas south of the Rio Grande, and hopefully future projects of this nature will be hemispheric in scope, since innumerable cultural exchanges have taken place from South to North.

The writers were limited to only 500–word essays on each artist; somewhat hamstringing any attempt at in-depth analysis. On the plus side, given such a limited space, the writers chose their words carefully, resulting in beautifully written biographies of contemporary artists. Many of the artists are also writers and vice versa, so meeting and collaborating on this project will no doubt spark future collaborations. Magazine and book editors now have a showcase of talented Native art writers—with many more accomplished Native writers who were not part of this project. The Vision Project shows the world that Native art writers more than up to the task to write about Native art.

How does this differ from projects such as American Indian Art Magazine’s selection of 35 Native artists’ profiles for their 35th anniversary issue? In fact eight artists (Marcus Amerman, Arthur Ammiotte, David Bradley, Bob Haozous, Shelley Niro, Preston Singletary, Roxanne Swentzell, and Denise Wallace) were included in both projects. The immediately difference is that the magazine primarily chose non-Native authors.

Diane Pardue’s profile of Denise Wallace uses more marketing-inspired adjectives, “graceful,” “enchanting and engaging,” (AIA 73) and discusses technique in great detail, while Barry Ace goes more into the context of art in tribal society (Mithlo 186), but the profiles are astonishingly similar. Jennifer Vigil discusses Roxanne Swentzell’s art about women’s body issues (Mithlo 174-5) while Zena Pearlstone doesn’t even touch on the subject but does mention Swentzell’s work in permaculture (AIA 70). Both Mary Jan Lenz and Mique’l Icesis Askren describe Preston Singletary’s being raised away from his culture and his initial pursuit of music; however, Askren, the Manifestations author, looks at the irony of European techniques reconnecting Singletary with his people and that his glass sculptures take become kinetic, when illuminated by light. Ryan Rice touches on Shelley Niro’s “multi-nationality” but gives more straightforward resume information (awards, collections, degrees) than Zena Pearlstone does in her essay, which describes a range of Niro’s works (Mithlo 148-9, AIA 61). And so on it goes.

Trust me, I desperately want to see wide disparities between the two publications approached to art writing; however, the differences are subtle. Over time, the subtleties add up—aesthetics and techniques or content? Tribal ethnologies or contemporary tribal political realities? Some Manifestations art writers make a more dramatic departure. Overall the Vision Project's selection of artists lean towards the more conceptual, more difficult, and not always aesthetically pleasing artwork and there’s more space to discuss harsh realities. But as Nancy Mithlo points out, "the presence of contemporary Native art made from the broken legacy of America's attempt to destroy our communities is powerfully compelling, stark and well, I'll just say it, beautiful" (Mithlo 19).

In this project, women writers were able to analyze women artists and discuss women’s issues, which upon reflection, is not all that common. My personal observation has been that women artists are much better represented in the Native art world than in the mainstream art world; however, gender inequalities do exist. Of the 60 artists, 24 are women. 40% is a positive sign.

It so good to see the focus of Native art writing on content for a change. Thanks to Nancy Mithlo, Manifestations editor; Stephen Wall; Will Wilson, Vision Project manager; Sarah Sense, former Vision Project Director; and everyone else who made this project and publication possible. So far the book is only available through the MOCNA gift shop. Their website is "under construction," but their phone number is 1-888-922-4242.

Thanks for writing this America! I just received my copy in the mail and haven't had a chance to read through the whole thing, but the few profiles that I have checked out will prove immensely helpful next semester when I teach a class on Contemporary Native Art.