“Designed to Last: Striving toward an Indigenous American Aesthetic”
The International Journal of the Arts in Society. Volume 4, Number 2, 2009: 373-386.
Heather Ahtone (Choctaw-Chickasaw)

When I got my hands on “Designed to Last,” I handed it out to people like Chick tracts. So many people write about the need to assess Indigenous American art based on indigenous values; however, this essay was the first time I have ever seen anyone propose a way to do so. I will attempt to summarize her main points.

Choctaw-Chickasaw scholar Heather Ahtone is a doctoral candidate at Kansas University and a research associate for the University of Oklahoma’s Diversity in Geosciences Project. She draws upon the traditional knowledge of her relatives, tribespeople, and members of other tribes to complement her academic studies.

Ahtone was conducting research for the American Indian Cultural Center and Museum, when a Ponca man explained to her how the design of his floral beaded pipe bag was a map with a related hunting song (373). This revelation crystallized the complexity of Indigenous American art for her.

In the past scholarship of Indigenous America art came from a Eurocentric perspective. Art historians examined art collected with little information or cultural context or judged the art solely by its decorative. This formalist approach, popular in the Modern Era, barely skims the surface of the artwork’s meaning. The need for Indigenous methodologies in art history is clear. Donald Fixico (Shawnee-Sac & Fox-Muscogee Creek-Seminole) writes, “The scholar must consider the worldview of an Indian group to comprehend its members’ sense of logic and ideology” (374). Aaron Fry writes that “…after 150 years of ethnographic studies of Pueblo peoples, art historical examinations of twentieth-century Pueblo arts have failed to fully engage Pueblo concepts and perspectives on the production of these arts” (374). Western scholars often tend to divide ancient or contemporary Native art, instead of acknowledging the cultural continuity between the works.

In his article “In Search of Native American Aesthetics,” Leroy N. Meyer describes tribal cultures as “deeply integrated, unlike the fragmented, cosmopolitan culture of the dominant society” (375). Indigenous art cannot be separated from philosophy, spirituality, or daily life—different expressions of Indigenous cultures are integrated and complement each other.

Steven Leuthold proposed a framework for understanding Native art in his book, Indigenous Aesthetics: Native Art, Media, and Identity (University of Texas Press, 1998), that “addresses the relationship between aesthetics and other cultural realms with reducing one realm to the other. In this sense an artwork can be valued for its expressiveness, complexity, creativity, or formal structure… without artificially separating the experience of art from other valuative dimensions of experience: the moral, economic, political, interpersonal, or spiritual” (376). Leuthold’s methodology makes it clear that Western art theory, as Ahtone writes “serves to seek out point of distinction and difference, to use a linear approach to hierarchy for identifying culturally based expressions” (376). Leuthold applies his method to indigenous film and video, but Ahtone wonders if his approach would work the non-Western media of tribally specific traditional arts. 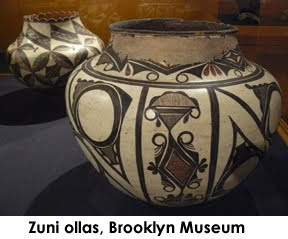 Instead of focusing on points of difference, Ahtone suggests that Indigenous art theory should be based on “finding relationships and shared commonalities” (376) She writes, “The use of relationships is a part of the coded language embedded in all aspects of Indigenous American culture” (376). These relationships can be expressed through “living metaphors” that are expressed through visual arts, dance, song, and oral history. Relationships of natural forces, including humans, reflect two fundamental values in indigenous society: balance and reciprocity. Balance, or harmony, reflects “the mutually dependent relationship that all forms of life have with each other.” Reciprocity is expressed through generosity and “the necessary acts of generosity that maintain balance between interacting forces, including human, natural, and spiritual” (377). Together these are part of “an interdependent pattern that extends like a spider web and draws strength form the interdisciplinary, yet tangible connections” (377). Looking at Indigenous aesthetic, one should also study science, humanities, religion, politics, and other disciplines because an integrated, interconnected, interdisciplinary approach will enhance one’s understand of all these and other fields.

“The traditional knowledge of Indigenous American culture, largely anchored to concepts of regeneration and reciprocity, is expressed and practiced in a network of symbols, metaphors, and myths,” Ahtone writes, which manifest in “ceremonies, prayers, songs, dances, and the arts—largely communal experiences” (377). Regeneration, or renewal, also play a key role in indigenous cultures.

Art materials can have intrinsic meanings and significance in Native art. Many indigenous art forms are made from materials gathered from the natural environment. A protocol of reciprocity often guides the gathering of the material, which reflects the artist’s relationship to the land or water. For example, indigenous California basket weavers have specific songs for gathering certain plants and observe strict menstrual taboos. Ahtone gives the example of Southwestern potters praying and giving offerings before gathering clay. The clay is often shaped into a hollow round form with a circular opening, resembling the earth and the emergence of the people from the underground to the surface. Designs painted on the clay can reference natural phenomena such as weather patterns. “Through this process of reverence and utilization of materials,” writes Ahtone, “many Indigenous people share a reverence for the objects based just on materials alone that is without comparison in the Western culture” (379).

Indigenous artists might use new designs with traditional materials, or they might use traditional designs with new materials, but either way, they are “expanding the visual dialogue about the Indigenous experience”—as opposed to departing from it (379). Ahtone credits art’s ability to convey traditional knowledge and spiritual beliefs as one of the reasons tribal cultures have survived despite centuries of colonialist suppression (379).

Metaphors—symbols used to represent related concepts or objects—are central to Indigenous art. The metaphoric mind—an intuitive mind in direct communication with the subconscious and nature—can perceive “beyond the limitations of our rational mind” (380). The symbols that create a metaphoric narrative were created and regenerated over generations. They represent natural forces and cosmological, both of which are timeless and interconnected. Many tribes’ oral histories contain both the past, present, and future, and much Native art is equally timeless in scope.

Leroy Little Bear (Blackfoot) writes, “The Native American paradigm is comprised of and includes ideas of constant motion and flux, existence consisting of energy waves, interrelationships, all things being animate, space/place, renewal and all things being imbued with spirit” (381). In this state of flux, symbols “provide anchoring points for Indigenous peoples to acknowledge and be reassured that their current dilemmas and circumstances are no more than an evolution of the difficulties and bounties shared by their ancestors,” write Ahtone (381). 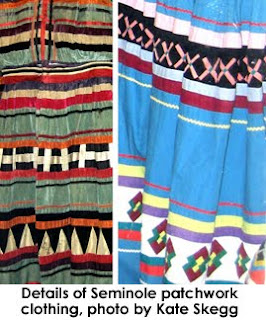 The strength of symbols is that they can have multiple interpretations, and the artist can add their own personal meanings to the larger cultural meanings. These multiple readings enhance each other. This flexible and additive nature of symbolism helps Indigenous American arts “serve as a conduit for cultural perpetuity” (382). The repeated use of symbols invites personal memories to become attached to them and can invite self-reflection. An example new symbols being created is Seminole and Muscogee patchwork, which is a 20th century development. Seminole patchwork developed as an art form primarily in the 1920s and 1930s. By creating colorful appliqué patterns from scraps, Seminole women could create beautiful attire for themselves and their families during hard economic times. The patchwork designs were given names connected to natural forces, such as lightning or storms. Stories related to the imagery followed, and clans connected to the natural phenomena adopted certain designs. Worn during dances, state occasions, and ceremonies, the patchwork patterns become intertwined with self-identity and tribal self-determination.

The ability of these multilayered, collective and personal symbols, metaphors, and content-laden materials to relay cultural knowledge is reflected in many Indigenous artists’ statements. Ahtone cites the artist statement of the late Michael Kabotie (Hopi) as a prime example. He painted the Hopi feathered serpent, which, as Ahtone writes, “represents the dynamic between heaven and earth and the constant power struggle between these two energy sources” (383). In his work, the feathered serpent also speaks to our dangerous dependence on oil—a contemporary interpretation of a timeless symbol.

In oral societies, the arts have served as a visual language and connect tribal members across space and time. Ahtone concludes, “Using this aesthetic, those concepts of the metaphoric mind, uses of symbols and myths, within a culturally specific context, allows for a discussion about the art that incorporates the metaphysical without becoming romantic or sentimental” (383-4). She invites critical review and is currently putting her methodologies to work in critiquing contemporary Indigenous American art.

The entire essay can be ordered through: The International Journal of the Arts in Society.

Heather Ahtone is presenting her paper, “Reading Beneath the Surface: Joe Feddersen’s Parking Lot” at the College Art Association Conference in New York on Wednesday, February 9, 2011.

The Michael Kabotie interview is online here.
Posted by ahalenia at 9:47 PM