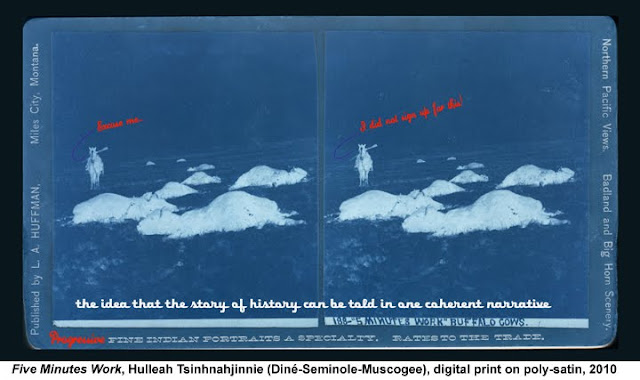 “It is my hope that these new works present a visual confrontation,” Tsinhnahjinnie writes, “an argument with premise that should be critically reviewed and endless questioned.”

Her dark palette of blacks, silvery blues, purples, browns, and a process cyan referencing CMYK prints, imbues the work with a dreamlike or nightmarish quality, punctuated by bright citron, red, and orange accents.

The first piece that confronts the viewer is one of the strongest, A Penny for Your Thoughts, derived from Laton Alton Huffman’s Stereoscope postcard, Taking the Tongues. Images of the buffalo nickel form a border below a giant buffalo nickel combines with Huffman’s print, featuring a man stretching a tongue for cutting from a buffalo corpse, one of eight – some partially butchered. The overarching, larger buffalo from the nickel resembles snowcapped mountains. Tsinhnahjinnie  changed the nickel’s text to “United States of Amnesia,” which is a little predictable; however, the text E Pluribus Unum takes an ominous tone, when one considers that the buffalo were slaughtered almost to extinction to destroy Plains Indians way of life and pen them on reservation to ultimately try to assimilate them in mainstream American society; that is, to make many people into one.

Laton Alton Huffman’s Taking the Tongues, is displayed next to Tsinhnahjinnie’s response. It’s a diminutive and faded sepia-toned Stereopticon (think View-Master) from Miles City, Montana, of the lone hunter butchering the eight buffalo carcasses; his rifle resting on one. I studied the piece carefully to clues to the hunter’s identity–was he Native or not? Ultimately it didn’t matter; one man killing eight buffalo at once is excessive no matter what their background is.

This image and the presence of the “Buffalo Nation/Bison Nation,” as the artist describes the animals so crucial to Plains culture, form a backbone to the show. The second work by Tsinhnahjinnie, Taking the Tongues, shows the same image darkened with the right image reversed to form a mirror with Ronald McDonald leaping through the frames. Ronald McDonald, who looks fairly demonic even in the best of times, presents a jarring representation of contemporary consumer culture, the demise of buffalo, and our own health – a food imperialist.

Another of Tsinhnahjinnie’s digital collages, Five Minutes Work, uses an earlier photo from the same series. The inversed image, mostly cyan, reminiscent of an architect’s blueprint, features the same eight buffalo carcasses with a lone horse instead of a man. In the first panel, “Excuse me” is scrawled above the horse and in the second, “I did not sign up for this!” Tsinhnahjinnie’s multilayered, darkly humorous work, braiding together history and 21st century banality,  reminds me of my favorite contemporary British artist, David Godbold. Anticolonialism figures strongly in both the artists’ work.

Two photographers provide Tsinhnahjinnie with the majority of her inspiration: Laton Alton Huffman (1854-1931) from Iowa, learned photography from his father, was attached once by Dull Knife (Cheyenne), and settled in Fort Keogh, Montana in 1879-1880. He later became a hunting guide and rancher and sold buffalo hides to supplement his photography sales (Sharyl Ferrall). The second photographer is William Henry Jackson (1843-1942), who owned a portrait studio in Omaha, Nebraska and was the first published photographer of Yellowstone National Park and the Ancestral Pueblo cliff dwelling at Mesa Verde (Getty Museum). 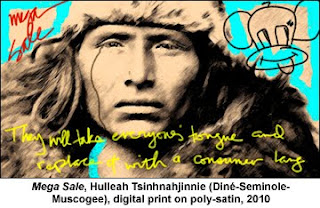 The Jackson Brothers provide the albumen print, Pawnee Indian—the inspiration for Mega Sale.  The Pawnee man in a fur hat and buffalo space is given a black scrawl down his face (a single tear?) and is treated to either the “dry brush” or “watercolor” filter in Photoshop, a program that also surprisingly has a “smudge stick” filter. A graffiti monkey and writing complete the piece, which is captioned by a Hawaiian Punch-esque font proclaiming: “The idea that history is about us.”

Since Photoshop is so associated with advertising and desktop publishing, it’s disconcerting when the rules of typography and graphic design are broken. For instance, The Special features a variety of disconcordant fonts from the original William Henry Jackson photograph, with “Pawnee, Omaha Special, specializing in authenticity!”  added in a font featuring stars for the i-dots. This piece is flanked by several 19th century photographs of the photographer’s work places — ranging from a cowhide tent, with a railroad and power lines faintly visible in the background to images of large interior spaces with workers a sinks, revealing that photography of Native Americans and the West were big business.

The show concludes with a tetraptych, Today I Was Thinking… At first it seemed like an afterthought, but luckily the space is ideal for sitting with the art. After awhile it began working on me. The four horizontal printed textiles were inspired by L. A. Huffman’s hand-colored platinum print, copyrighted in 1912, Buffalo Grazing the Big Open, shot in northern Montana in 1880. They feature the buffalo herd on a black background, accents with yellow and orange. The first has a photographs of moon phases, the second warped citron moons arching over the sky, as if referencing the eons passing with the buffalo herds shaping the Plains landscape; in the third Ronald McDonald once again rears his ugly head; and finally peace is restored and the buffaloes quip that “Real Indians eat curry.” This piece seems like Paiute prophet Wovoka’s vision of the buffalo returning but really says they never left the Plains and contemporary consumerism is just a blip in the timeframe of the Bison Nation/Buffalo Nation.