Turning off Highway 62 onto Old Bacone Road in Muskogee, Oklahoma will lead you to a cluster of native red stone buildings with blue slate rooftops. Some buildings date to the 1880s. This is the campus of Bacone College, the oldest continuing Native American institution of higher learning. The school boasts the oldest continuing Native American art program in the country. Celebrating its 75th year, the Art Department was founded in 1935 and is unique in that Native American artists have always directed the program. Bacone College itself was founded in 1880, when it was simply known as Indian University. While its campus stands within the Muscogee Creek Nation’s tribal jurisdictional area, and the college maintains close relationships with area tribes and the American Baptist Churches, the school remains an independent four-year liberal arts college.

Professor of English and Philosophy Mary Stone McClendon (Chickasaw) founded the Art Lodge at Bacone in 1932. Her Chickasaw name was Ataloa, and the art museum was later renamed the Ataloa Lodge in her honor. The comfortable, home-like museum exhibited her extensive collection of Native American art. “Many of the beautiful things created by Indians have been taken far away, to museums in the east, where the Indians rarely see them,” she said at the museum’s dedication. “We want to bring many of those things here… where Indians may see them and be inspired by them” (Elder 64).

In 1935, the charismatic dancer, actor, and artist Acee Blue Eagle (Pawnee-Muscogee-Wichita) helped establish the college department and became its first director. Studying under the Kiowa Six’s mentor, Oscar Jacobson (Swedish-American), Blue Eagle helped create the Bacone style of painting, which was in the flat-style popular among Native artists at the time. He drew upon his Southern Plains and Southeastern oral history and worldviews, as well as Modernist influences such as Art Deco. This syncretic, versatile style became a vehicle for expression for artists whose tribes had, due to Removal and cultural upheaval, lost their tribally-specific traditional painting styles.

Woody Crumbo (Muscogee-Potawatomi) replaced Blue Eagle in 1938. Crumbo was a dancer, musician, muralist, and easel painter. In 1947, Crumbo was succeeded by Dick West, a Cheyenne peace chief and father of the National Museum of the American Indian’s founding director, Rick West. Ruthe Blalock Jones (Shawnee-Delaware-Peoria) directed the art program from 1979 and now works as a fulltime artist. Tony Tiger (Sac and Fox-Muscogee-Seminole) took the reins from Jones as Director of the Art Department. He has extensive experience and working with Indian young people in the US and Canada, and is an award-winning mixed media artist. Tiger’s work incorporates images of family photographs with vividly hued, transparent layers of paint, and, often, sculptural elements, which differs dramatically from the work of his predecessors.

I was highly impressed by the Bacone students who attended last year’s Native American Art Studies Association (NAASA) conference in Norman. A Kiowa student in particularly was quite articulate about how his art was created for family and community, not for the larger art world. Listening to these young Bacone artists made me curious to know more about the new director’s efforts to revitalize this long-standing art program.

Why did the faculty of Bacone back in the 1930s feel the need to create a visual art program? Why are visual arts important to Native students today?
From what I have heard and read, the study of the visual arts was a natural progression in Native education. Many students created and excelled in many art forms already, such as pottery, weaving, carving, and painting. The forms were primarily either utilitarian in nature or history based, items such as baskets, pottery, and ledger paintings. The study of art, form, subject matter, and content, for the Native student has evolved. Technology and the influence of contemporary society on the Native population is evident in the art that young Native artists are creating.

How large is the art program? What tribes are most represented?
The art program at Bacone is continuing to expand, and each semester we are accepting more art majors. There is also a growing interest in the art program, enticing students from other disciplines to take the classes we offer. The tribes most commonly represented on campus are Cherokee, Choctaw, Chickasaw, Muscogee (Creek), and Seminole, but there are students from tribes throughout the United States and Canada studying at Bacone. 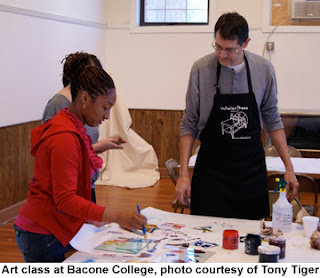 What are some common themes you see emerging in your student’s work? What are their goals are artists?
Technology and mass media are very influential, and as a result themes emerging from both technology and mass media are quite prevalent. Many students are also interested in mixed media and digital imaging. As far as their goals as artists, we have students who desire to go into many different aspects of the art world. I considered it the program’s goal, since we are still an associate’s degree program, to give the students a strong foundation in the arts. We want to prepare the student’s for the next level of study.

You’ve been cleaning out storerooms filled the artwork. What was your most unexpected find?
I found the original ink drawing by Dick West, The Founding of Bacone.

Do you find time for your own artwork? Has your experience at Bacone so far changed your art?
Yes, I have a studio in McCombs Art Building. I teach a class, go down to my studio and work until my next class. I have an upcoming solo exhibition at the Southern Plains Indian Museum which will run from July-September 2010. I have found the history of the institution has influenced my new work. My grandfather attended Bacone in the early 1900s, and that family history combined with the names and images of the past is fueling a new body of artwork.

Your mixed media work is a dramatic departure from the art for your predecessors. What kind of response does your work receive in northeastern Oklahoma?
I have received good reviews in the media and in responses from fellow artists. The word “new” is used a good deal, and the mixed media applications create interest and questions about the content and form.

Many great artists have had instruction at Bacone College. The staff are incredible artists themselves and are influential and positive role models. Dedication to their art and their goals are well displayed.

Thanks America for the support, we now have more art majors than the college has seen in over a decade. I will bring a group of art major to Santa Fe this August for the market. The market and the Santa Fe art seen will allow majors to experience an influential art center. Tony Tiger

Tony is doing a great job! really proud of our friend and hopeful for the continued prosperity of Bacone's future. thanks, America, for giving Tony props for kicking *ss!
-heather ahtone