Meta-Criticism: Responding to the Response to the Tipi: Heritage of the Great Plains at the Brooklyn Museum, Part Two

Continuing to look at writing about the Tipi: Heritage of the Great Plains currently at the Brooklyn Museum... 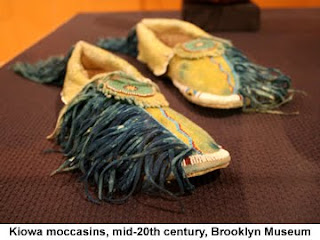 The New York Times disabled comments to Ken Johnson’s article, so award-winning art writer Lee Rosenbaum responded to him on her blog in “Beyond the Tepid Tepees: Brooklyn’s Engrossing Plains Indian Show.” She said she “loved this show!” and yet, she delivers one backhanded insult after another. Rosenbaum feels the contemporary art “don't measure up to their antecedents.” Teri Greeves’ Great Lakes Girls, a fully beaded pair of high-heel shoes, which Rosenbaum labeled as “kitsch”; however, Greeves’ beading ability compares very favorably with many 19th beadworkers, and she uses finer materials. Rosenbaum describes Lyle Heavy Runner’s tipi as “big” and “garish.” Perhaps if it were a century old, then it would be “prodigious “ and “graphically bold.” The contemporary artworks are “modern knock-offs.” What are these 21st century post-modern artists “knocking off”? Are they not allowed to bead, carve buffalo horns, weave baskets, or sew tipis? By what authority? Is there any aspect of these works that suggest they were finished quickly and without care?

Rosenbaum shares information text from and even photographs of the museum labels, demonstrating that Ken Johnson’s criticism that the exhibition "offers no revelatory perspective on its [the show's] contents” is unwarranted.

As she brings up in her Wall Street Journal article, Rosenbaum has major issues with the curators choosing to not display culturally sensitive shield covers imbued with medicine. You either respect Native culture and appreciate that some things are not made for general public to view, or you don’t. Attempting to divorce the aesthetics of an artwork from its content is to undermine the intentions of the artist. When it comes to culturally sensitive items that cannot be seen by the public, the only parallel in Western culture I can think of is the Ark of the Covenant (burned into our collective psyche by Indian Jones and the Raiders of the Lost Ark). Rosenbaum writes she “was of course disappointed that Brooklyn had to fall back on a newly created substitute.” So Marcus Amerman’s fused glass sculpture can’t be seen as an art piece in its own right, with its own aesthetic qualities and content? Am I to assume Sherrie Levine’s photography is also “a newly created substitute?” Does Amerman and the other contemporary artists simply have nothing valid to say? That would make them unique among artists—being devoid of independent viewpoints or experiences.

Rosenbaum wraps her response up with her view that those interfering tribal consultants “restricted Brooklyn's display of pipes” by having the pipe stems and pipe bowls displayed separately because inserting the stem into the bowl “activates the power of the pipe,” as curator Nancy Rosoff explained to Rosenbaum. Kudos to Rosoff for being respectful and showing the pieces separated allows the viewers to see more, not less, of the pipe’s components.

“Today's curators want visitors to view Indian artworks not as quaint ethnographic artifacts, but as vital expressions of a living culture, spanning prehistory to the present,” writes Lee Rosenbaum about Denver Art Museum’s new Native American galleries. I can’t agree enough. While praising the museum, Rosenbaum finds the juxtaposition of old and new works “exasperating” and is troubled by Bently Spang’s photography war shirt. She describes the Northern Cheyenne artist as “suddenly ubiquitous,” which is ironic, since the artist has been steadily exhibiting for two decades. His works “are meant to be seen, not worn, are also on view in Manhattan and Brooklyn.” So, is this a problem? He’s an installation artist, performance artist, photographer, and filmmaker. Should I be sad that I can’t wear Guy de Cointet’s or Nairy Baghramian’s artwork? Should Sprang not exhibit his artwork in Manhattan or Brooklyn?

Nancy Blomberg, curator of Native American art at the Denver Art Museum, is quoted saying, "Everything in this gallery was new when it was made. . . . I didn't want to separate prehistoric from historic from contemporary.” Yes! This simple statement is powerful. We want our present, our future, and our past, and to acknowledge the continuity between them all. Someday the mainstream art world will accept the fact that Native cultures evolve just like every human culture the earth.

The oddest comment by Rosenbaum was suggesting that museums working with Native advisors can “diminish” art exhibits and cites Nancy Rosoff and Susan Kennedy Zeller’s decision to not display warrior’s shield imbued with medicine in the Brooklyn Museum’s Tipi exhibit. I applaud Rosoff and Zeller for their decision, which honors the deceased warriors, their medicine, and their tribes and protects the audience from exposure to potential danger. By being respectful of culturally sensitive materials, tribes will want to work with these curators in the future and will most likely be more forthcoming with information and artworks to share with the museum.

Rosenbaum suggests the two curators had to “settle” for a fused glass shield by Choctaw artist Marcus Amerman. I would love to “settle” for one of his five-digit glass sculptures, which win awards and are in major collections throughout the country. But a profound ambivalence to contemporary indigenous art permeates all these critiques.

N.F. Karlins, a New York critic and art historian, wrote a highly informative and straightforward piece for Art.net, “At the Brooklyn Museum: Tipis of the Brooklyn Plains.” Karlins discusses gender roles in art, ownership of designs, aesthetics, and changing traditions. One line strikes an strange chord: “…Native Americans had architecture as well as art’’ – are there cultures without architecture? But overall, this is a well-written, concise critique. Of the 11 illustrations, the only contemporary images were two works by Teri Greeves.

Melissa Deliso’s description of the Tipi show is enthusiastic, and she took the time to personally interview curator Susan Kennedy Zeller. She writes about a “Southern Shayne tipi.” I make type-o’s and spelling errors too, but I don’t have paid copy editors reading my text. “Cheyenne,” besides being the capital of Wyoming, is a standard word in all computer spellcheckers. In composing her title, Deliso was most likely unaware that Kansas’ state song, “Home on the Range” has a verse devoted to the ethnic cleansing of Natives from Kansas: “The red man was pressed/from this part of the West,/He's likely no more to return/To the banks of Red River where seldom if ever/Their flickering campfires burn”.* Fortunately the ethnic cleansing was unsuccessful and Kansas is home to four federally recognized tribes and Haskell Indian Nations University.

Sutton, Benjamin. “The Brooklyn Museum Turns Tipis Inside Out.” The L Magazine. 2 March 2011.

Benjamin Sutton wrote about the functional and conceptual aspects of a tipi and about the complex and interdependent Plains gender roles. He points out that the exhibit included tipi liners painted by Rain-in-the-Face, a 19th century Lakota warrior, and Harvey Pratt, a living Cheyenne Vietnam veteran. He makes the interesting observation that tipis are “places to display pride and admit vulnerability.” Unfortunately, Sutton also seems to be troubled by contemporary Native art, writing that “Contemporary pieces problematize such functions” and is concerned that Crow artist Mary Lou Big Day’s dolls are sold in galleries instead of being played with. So the problem isn’t that Mary Lou Big Day has chosen a potentially utilitarian or “craft” form of art; it’s that they are valuable and featured in art institutions. Maybe the longstanding tradition of highly valuable Japanese ningyō would be an appropriate comparison?

Levin, Ann. “'Tipi: Heritage of the Great Plains’ on view at the Brooklyn Museum.” The Associated Press. Via North Jersey.com. 1 March 2011


Ann Levin wrote a descriptive piece literately with when/where/how much information about the show. She describes practical details of the “tepee” and paraphrases the rules of behavior in a tipi as outlined in the show’s signage. She described lessons Dennis Sun Rhodes (Northern Arapaho) learned from his grandmother and Levin concludes, “Maybe all of us should be living in tepees.” Her description of the show was concise, precise, and thoughtful.

Joseph Sutton is the first writer who comes out and speaks to the unrealistic perspective about Native Americans that is so pervasive in the United States. He mentions that Brooklyn only has 0.3% Native American population, which acknowledges that Brooklyn has a Native American population. Sutton encourages his readers “to satisfy their curiosity of a culture integral to our country’s history.” This is profound; the Native American isn’t the Other. Natives and non-Natives are united by a common national history. Sutton describes Harvey Pratt’s Vietnam War Experiences Tipi Liner and discusses Native military traditions. He talks about earlier works being functional first and aesthetic second. A basket by Arapaho-Seminole artist Carol Emarthle-Douglas (not Carole Emarthele-Douglas),“Gathering of Nations” is presented as an example of the shift towards aesthetics over utility in contemporary Native art. Sutton’s statement that “the basket is strictly art” is huge in a climate when “crafts” are frowned upon.

Sutton writes, “It’s a privilege to have such insight on a culture we do not pay enough attention to outside of stereotypical portrayal in the media.” The “we” implies that the readers cannot be Native themselves, but other than that, his critique was well written and thought out. He suggests the show is didactic, which is a legitimate criticism.

I had hoped to close by writing about Indian Country Today’s assessment of the Tipi exhibit; however, all they had was a brief blurb and a slide show. There’s an enigmatic, uncensored comment questioning Lyle Heavy Runner’s Blackfeet heritage, a subject I know nothing about. But if you want anyone to seriously consider what you have to say, LAY OFF THE CAPS LOCK. Native magazines tend to be uniformly promotional in tone. So no criticism from the Native side, yet… I’ll definitely watch for more Native responses formal and informal. Hopefully a Native critique will be forthcoming.