The Heard is perfectly timed because, after hibernating all winter, we all want some sun and to see each other. This year bought some structural changes, including an additional 100 artists. The larger tents were so much nicer with fewer tables and more escape routes. The economy kept many seasoned veteran artists at home, giving opportunities to new artists. 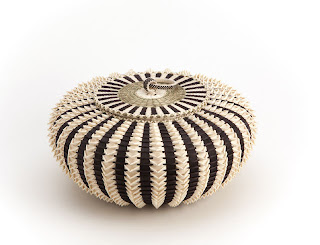 One of the first-timers did spectacularly well: 32-year-old Jeremy Frey, a Passamaquoddy basket weaver from Maine, who won Best of Show will his Point Urchin, a gorgeous sweet grass and brown ash basket with unbelievably fine point curls and a lid with a wrapped ring handle. He learned basket weaving from his mother Gail Frey, and, recently, National Endowment for the Arts awarded him a major grant.

I’m not sure how they organized judging, but judges also competed, which seems like a conflict of interest.Lacking much inventory, I didn’t bother entering the competition, and I have to say, it was rather nice to not be emotionally invested in the outcomes—I was happy for my friends and pleased to see some amazing work. Randy Kemp (Yuchi-Choctaw-Muscogee) and Ryan Singer (Diné) both had hilarious paintings that won. I was surprised to hear they don’t know each other already. A show of Kemp, Singer, and Daniel McCoy (Muscogee-Potawatomi), who shares their humorous social commentary, would be a great thing.

The Heard is much more relaxed and genteel than Indian Market, although structural changes between the Heard Museum and Heard Museum Guild made for some interesting developments—the funniest being the bathroom cops. Apparently the Heard Museum has an aging plumbing system. May I suggest private donors be solicited to overhaul the system? They could then have plaques on each toilet, dedicated to the enemy of their choice.

The extensive network of demonstrators in the main museum courtyards represented area tribes and was an interesting, educational additional to the market. For instance, Jacob Butler (Pima-Maricopa) of the Pima-Maricopa Cultural Resources Department shared detailed information about etching shell with cactus juice.

It was great to see everyone—even if fleetingly. Thanks to Andrea Hanley for sharing information about challenging new artists’ works at the Berlin Gallery. I pillaged the new museum bookstore. Thanks to the best booth mates in the world, Marcus and Linda. Thanks to Francis and Jose Burruel for their incredible hospitality. Thanks to Staci for being a most excellent traveling companion. Oh yes, and thanks to Linda and Gloria for taking me to IKEA for the first time in my life. And I am still finding oranges in my boxes.
Posted by ahalenia at 10:50 PM

I'm not sure how I missed the bathroom cops.

The bathroom cops! I was about to fight the system when I saw a man trying to keep me out of the bathroom. I'm not a port-a-potty type of gal.
Awesome post America - but don't forget the Textiles Classification!