In Session: Jolene Rickard and Lucy Lippard In Conversation 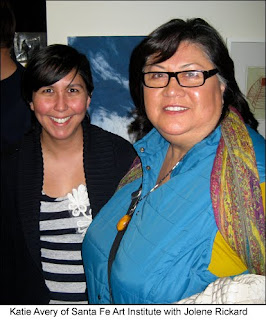 “In Session: Conversations with Contemporary Native Artists and Scholars” is a lecture series organized by the Museum of Contemporary Arts. Jolene Rickard (Tuscarora) is an Associate Professor at Cornell University, a visual historian, artist, curator, and scholar of Indigeneity on a global scale. Lucy Lippard, art critic and curator, has written 21 books, is a Guggenheim fellow, and lives in Galisteo, New Mexico

Lippard met Rickard three decades ago at the American Indian Community House (AICH), when it was on Broadway in the SOHO strip of New York City. Rickard and Peter Jemison (Seneca) then introduced Lucy to the Native American art world. Native art history books don’t place time period in context, but Rickard observed a disempowerment of Native artists then, especially in comparison to African-American artists. She cites the lack of theoretical tools and a “lack of recognition of a discrete indigenous political space” as contributing factors to this disempowerment. Now, the art world’s strategy to deal with Native art is for “artists to be seamlessly integrated into the international art scene” without cultural context, which results in “erasure,” Rickard observes. However, Lippard frequently encounters Native artists who actively want to be part of the mainstream.

Rickard is currently at Cornell and focused on intercultural analysis — a center-fringe analysis. She has traveled to indigenous communities beyond those in Canada and United States, as well as exploring the biennial art circuit. She says the situations in Central and South America is dramatically different from the situation north of the Rio Grande. Indigeneity in Australia, Africa, and Indian are highly complex, especially in countries where ostensibly the indigenous population is the majority. Despite the challenges, “if we don’t mark spaces,” Rickard says, “the other side of it is erasure.” Land is the defining concept for indigenous peoples, and she says, “We need to maintain these land bases.” The Maori are ahead of theorizing their own work.

“There will always be artists directed towards satisfying collectors in a particular way,” but Rickard does not write about those artists. “Our work articulates our philosophy. If an artist has a thin knowledge of this philosophy, they aren’t serving their community.” Rickard says, “Inserting yourself back into your community and maintaining a dialogue, you effect the people around you.” She says her tribe is “always willing to take people back in,” but when one returns to their tribal community, they do not return as an expert.

No artists are unanimously accepted by their home communities, so Rickard points out that it’s wrong to expect that of Native artists. “Our communities aren’t perfect,” she says and wants the next generation of artists and writers to critique the problems and challenges the stereotypes. “That has to be an indigenous writer,” says Lippard. Rickard disagrees, but that would have to be an incredibly thick-skinned non-Native writer to try to write about what’s wrong with a Native community

Native Americans are a comparatively small percentage of the United States’ population, globally indigenous people are a huge population and merit serious scholarship. The primary texts are still lacking in the indigenous art world. Lippard points out that the scholarship is happening in other fields, but points out, “Art is decontextualized when it enters the art world.” Once the underlying information is broached, people complain because, “they aren’t talking art.” A challenge of discussing indigenous art in the Americas, Rickard observes, one has to talk about colonialism—which the art world is reluctant to do.

"To be a post-colonial scholar is dubious,” Rickard says. “To the powers that be,” Lippard concludes. The public is happy enough to look at contemporary indigenous art but is not always prepared or willing to deconstruct colonialism, as it is seen as being too divisive. Lippard wonders if artists have more “wiggle room” on the subject than writers, and notices that post-colonial writers are going into teaching or art making.

Native artists in the United States maintain an adversarial relationship with the government. Rickard feels that First Nations artists in Canada, with the exception of the Haudenosaunee, appear to be more integrated with their government and part of the Crown. Continuing with the idea of sovereignty, Rickard points out that the Czech Republic has allowed a Six Nations girl’s team enter the country with their Six Nations passports. Hillary Clinton was supportive of other countries honoring Six Nations passports, but the United Kingdom refused — possibly due to an Anglo-Canadian agreement. “Canadian indigenous peoples have less rights than indigenous peoples in the United States,” she says.

Some indigenous groups that Rickard has observed, such as the Brazilian Yanonamo “don’t care what the rest of the world is doing. They move ahead with their own cultural projects.” The indigenous people of Taiwan have their own television station and are better versed about current issues of indigenous peoples across the globe than anyone else.

Rickard was asked about her plans for an upcoming scholarly journal of indigenous arts, and she says she is working on a website and wants to write about artists that don’t already have a monograph book about them. Certainly something to look forward to in the future!
Posted by ahalenia at 11:59 PM

You may not know the answer to this, but I'm wondering if Lucy was referring to American individuals when she said it's touchy to take on Post-Colonial concept as a writer--or is this something she thought was the case no matter the scholar's place of origin?s

I believe Jolene said it was problematic being a post-colonial scholar and Lucy brought up the idea that post-colonial writers are having a hard time and moving into the arts or teaching. They didn't say which country.

Sounds like I've got a whole lot of learning ahead of me. I recently started doing ledger art again and this article made me realize how powerful an art form like that could be.
Great writing, America!

Some indigenous groups that Rickard has observed, such as the Brazilian Yanonamo “don’t care what the rest of the world is doing. They move ahead with their own cultural projects.” The indigenous people of Taiwan have their own television station and are better versed about current issues of indigenous peoples across the globe than anyone else.

I believe Rickard meant that the Yanamamo were moving ahead with their own projects instead of waiting for approval or governmental or academic support.

She told this great story I should have included about an elder woman who was conducting a giveaway ceremony. A man came up to her and harangued her at great length about how she was conducting the giveaway in the wrong manner, so she quietly and politely listened to him until he ran out of steam and then turned around and continued with the giveaway. So I think that's how Rickard was looking at the Yanamamo.

Hearing about the indigenous Taiwanese television station was inspiring and it made me realize how very little I know about what's going on with indigenous peoples in Asia and Africa.