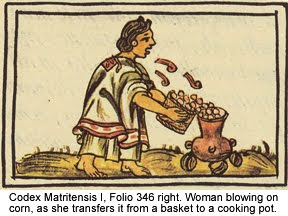 Since the majority of Indigenous Americans did not have writing before the 16th century, oral history, songs, dances, and visual art record precontact philosophies, history, and worldviews. In Mesoamerica, writing dates back 3,000 years, beginning with the Olmecs. Mayan, Mixtec, and Aztec peoples created vast libraries of books; however, many of these were burned by Spanish invaders. From the surviving manuscripts, or codices, we can glean a little of early Mesoamerican thought, including their views about art. Below are some excerpts from Nahuatl poetry recorded after Spanish contact.

Here through art I shall live forever...
A singer, from my heart I strew my songs
I carve a great stone, I paint thick wood
My song is in them…
I shall leave my song-image on earth (Brotherston 160).


–Nahuatl poem (circa 1570)
Cantares Mexicanos, fol. 27r-27v
The Cantares Mexicanos is a collection of lyrical poetry from the courts of the Triple Alliance (Aztec). The manuscript is in the collection of the Biblioteca Nacional de México in Mexico City. Approximately one and a half million people speak Nahuatl today.

The true artist: draws out all from his heart;
works with delight, makes things with calm, with sagacity,
works like a true Toltec, composes his objects, works dexterously, invents; arranges material, adorns them, makes them adjust.

The carrion artist: works at random, sneers at the people,
makes things opaque, brushes across the surface of the face of things, works without care, defrauds people, is a thief.

-Nahuatl poem from the Codex Matritensis,
fol. 115 v. (208), ca. 1540—1585
Miguel León Portilla writes that artists had a central role in Mesoamerican society, and “they had to learn to converse with their own hearts.” He writes that since the painters manifested sacred imagery into their artworks, they strove to become Yolteotl or “one with God in his heart” (Portilla 209). The above poem comes from the Codex Martritensis, also known as the Florentine Codex, which is a collection of a dozen books written between 1540 and 1585. Other Nahuatl poems from the Codex Matritensis describe jewelers and metalsmiths, stonemasons, textile artists, and potters. These poems juxtapose the habits of worthy artists with inept artists, described as “careless,” “greedy,” or “like a turkey with a shrouded heart” (208). In describing great artists, one such poem says, “The artists knew how to place them,/truly they put their deified heart into them./What they made was marvelous, precious/worthy of admiration” (211).

I enjoyed reading your blog ~ thanks for posting such useful content./Nice article and great photos. Very nicely done!
Modern Art

I have always read / been taught that Nahuatl artists maintained a respected position in society. How very interesting to read these translated poems on the negative view on those posing as artists! Astrud

(In the picture, is she blowing off the loose husks and threads before cooking?)

In Mixtec, Aztec, and Mayan societies, I've read that the court artists where a step below nobles. Maybe because they were so visible, they were held to a high standard?

The lady in the illustration is apparently blowing on the corn (the kernels look fairly large, maybe it's hominy?) so it won't be afraid of the cooking fire.

Thank you for the links! My understanding is that the Universidad Nacional Autónoma de México now offers a two-year college program taught in the Nahuatl language.

Great site. A lot of useful information here. I’m sending it to some friends!