In a Nutshell, Part 2 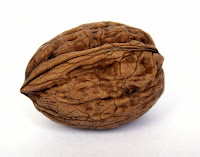 When someone mentions a supposed dichotomy between "fine arts" and "crafts" in Indigenous American art, I scan for escape routes. That conversation goes nowhere, because the unspoken framework governing those terms is fundamentally at odds with Indigenous art.

The notion of "art for art's sake," that visual art should have no utilitarian purpose, was proposed by Prussian philosopher Immanuel Kant in his 1790 Critique of Judgement (Fenner 7) and was echoed by many others in the following century. "During this period, 'the fine arts' were those that fit the aestheticist criteria for art for the sake of art and for the sake of nothing else," writes author David E. W. Fenner (7). This Enlightenment era philosophy still echoes among those would haven't studied any art theory in the last century.

A certain cadre of European and European-American thinkers strove to separate art from the banality of daily life, then subsequently, others have spent the last hundred years attempting to re-integrate art into people's lives. The Arts and Craft moment, John Dewey's book Art as Experience (1934), happenings of the 1960s, Thomas Crow's Modern Art in the Common Culture (1998), public art, street art, relational art, community art, etc.

My tribe never signed up to follow Kant or separate our art from our the rest of our lives. Aesthetics and content are interwoven in our artistic creations, ranging from installation to gig-making to basketry to digital art to featherwork.

Martin A. Berger sums up the situation with rare lucidity: "...trac[ing] our modern conception of art back to the eighteenth-century separation of the fine arts from crafts, of artists from artisans, and of aesthetic pleasure from entertainment. These divisions broke a two-thousand-year-old Western convention that art was any activity practiced with skill and grace. In the modern West, art came to be defined by the product created, the person making it, and the experience it generated in audiences rather than the quality of what was fashioned. [Larry] Shiner notes how this new definition of art helped consolidate relations of power: 'To elevate some genres to the spiritual status of fine art and their producers to heroic creators while relegating other genres to the status of mere utility and their producers to fabricators is more than a conceptual transformation.' He points out that 'the genres and activities chosen for elevation and those chosen for demotion reinforce race, class, and gender lines.'" (Berger 99–100).

Berger continues, "Since cultures outside of the West had never divorced aesthetics from utility, it was easy for European-Americans to devalue even visually alluring objects nonwhite peoples produced, given that such object always served a practical function" (Berger 100).

Good post, and very timely for sharing with my students!

We're not the only ones...(the problem with many people/theories, is that they claim to hold universal truths and insights, when they simply reflect moments in thought)...M. M. Bakhtin (remember that Russia and most of Eastern, pardon me, I mean Central, Europe has been denied inclusion in the beloved circle of Europe and European thought) spent most of his career answering back to Kant. His conclusion, there is no alibi in being, we, each of us, are responsible to answer back to life, saying, "art and life are not one, but they must become united in me, in the unity of my responsibility."

Thanks so much for sharing the quote by Bakhin, Reid, and happy birthday! And thank you for sharing your book, Lara!

that was a beautiful post! i'm going to pass it along to students here at OU... the Western ideal of separation only supports the use of boxes which support a hierarchy... but who benefits from that hierarchy? these questions need to be considered from an Indigenous perspective... so appreciate your thoughtfulness in putting this out there. heather ahtoen

Found out that Larry Shiner, professor of philosophy, was born in Oklahoma City in 1934. Maybe early exposure to Native American art opened his mind to non-Western art?

Thank you for writing this!

would it be possible to translate your web-site into spanish because i have difficulties of speaking to english, and as there usually are not numerous pictures in your internet site i’d prefer to go through a fantastic of what you may be writting

Yes, I would love to be able to translate this into Spanish. I keep asking around to see if anyone I know can translate — I will keep trying.