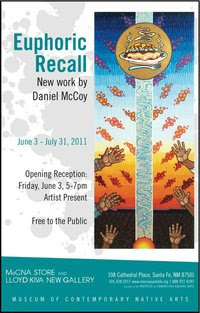 Daniel McCoy, Jr. unveiled eight new works in his (mostly) solo exhibit, Euphoric Recall, at the Museum of Contemporary Native Arts’ Lloyd Kiva New Gallery. Euphoric Recall happens when an addict remembers only the good experiences from her or his addiction.  The description is apt—as angst and heartbreak are portrayed, to quote Henry Rollins, "with a renewed vigor and enthusiasm not seen by many."

The Muscogee Creek-Citizen Band Potawatomi artist hails from Bristow, Oklahoma, attended IAIA in the early 1990s and 2000s, and moved back to Santa Fe after living at Lake Havasu. McCoy describes his work as a “visual time line” documenting his “past triumphs, current disasters.”

In his art statement, McCoy writes of his paintings, “I try to make them as busy as possible.“ That is no lie. Repetitive mark making and patterns set the pieces in motion, and his tragicomic narration buzzes, crackles, and pulsates with a simmering dynamic energy.

The largest piece in the show, The Letter, is also the most enigmatic. The acrylic-oil enamel painting is a collaboration between McCoy and Topaz Jones (Shoshone-Lummi-Kalapuya-Molalla). Bisected vertically down the middle, McCoy predominantly paints the left side and Jones takes the right, with an oversized heart drips blood from center stage. In a heavily outlined style reminiscent of R. Crumb or José Guadalupe Posada, a celestial woman surveys a mummified man in cowboy hat reading a letter. The clouded sky is populated by classic tattoos: swallows, daggers, scrollwork emblazoned with the phrase “Impending Doom.” The sky shifts to night on the right, with a map of Turkey and a projected Bat Symbol over a purple pueblo scene. A loose leaf notebook paper is a scrawled letter, with the words “Daniel, I forgive you” and “Love always, Topaz Jones.” Below is a yeti-like form on a pillow. This chaotic soiree leaves one with more questions than answers.

In the drawing Forbidden Art #1, a bright-eyed and plucky Deerlady, ala Veronica Lodge from Archie comics, stands with arms akimbo in a shiny pool of blood. A stompdance skirt and turtleshell dance shackles reveal her hairy cloven hooves, as she cheerfully presides over the grasping, screaming faces of her male victims, and she beams with pride over her accomplishments.

The show’s centerpiece, The Indian Taco Made by God, an acrylic painting on canvas, is quite beautiful, with a sky is stitched together from slashes of paint. Heavily articulated hands reach out for absolution from the perfect Indian Taco. Showcasing McCoy’s flair for visual puns, the clouds resemble bubbles in hot lard.  Taco can be taken as a lightly, as a clever joke, but underneath the dazzling colors and masterful graphic strokes lies questions. Why does Indian Country fetishize a food so unhealthy, born of poverty and privation? Nostalgia for comfort food is a running theme in McCoy’s work — Frito pies, Spam, commodities — but we are what we eat.

What refreshing about McCoy’s approach is that he is more questioning than didactic. His work is socially conscious but occupies a universe filled with possibility and contradictions — a young schoolgirl hauling an oversized Bible dreaming about Liz Taylor’s Cleopatra — comic book style with theological implications.

Euphoric Recall will be up through July 31st.
Posted by ahalenia at 10:28 PM

great review... the work sounds like it comes from that dark place we all are drawn to but some refrain from transgressing past the edge...

i ditto the remark about indian tacos... how long does it take for us to look for the best in our traditions... or even better yet, figure out how to make a healthy version of the taco... like they do at the Jacobson House in Norman, with whole wheat dough and grilled veggies. as TC Cannon says, (poorly paraphrased, i'm sure) -- what i'm doing now is the tradition of tomorrow.

Intrigued and Dazzled, looking forward to seeing more and meeting the man.-Starr