Denver Art Museum in the News 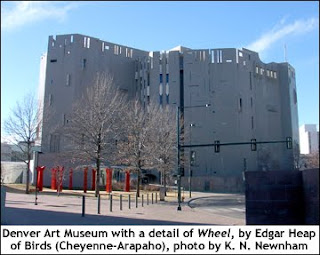 The Denver Art Museum just completed a massive renovation of their Native American galleries. The changes were heralded by a number of newspaper articles, including front page of the New York Times (thanks to M for point this out!). It’s heartening to see intelligent conversation about Native American art and the issues of its display in the mainstream media.

Roxanne Swentzell (Santa Clara Pueblo) is spending the next six months working on a monumental straw and clay sculpture, Mud Woman Rolls On. This beautifully drives home the point that Native art is alive and evolving, since visitors witnessed the construction as soon at they enter the third floor gallery.

Most of the articles focused on the museum’s and specifically Curator of Native Arts Nancy Blomberg’s efforts in presenting the work as art instead of ethnography, and de-emphasizing the history. For instance, the work is not arranged chronologically (Ellingboe). A common criticism of the National Museum of the American Indian was that it presented little or no history, but personally. Personally, I think that is fantastic. Not that learning our histories isn’t incredibly important, but it’s also important to drive home to the general public the fact Native Americans are living today. In one of their displays, DAM directly asks the viewers, “what is Indian art? Must it be old? Must it be functional?” (Ellingboe).

Several of the articles also focused on the museums’ efforts to attribute works to specific artists and list their names. Through persistence in research, Blomberg identified the creator of a 19th century representational ink-and-watercolor painting of a Ute Bear Dance. After visiting other museums and asking Colorado tribes, she happened to notice a similar styled painting in a Bonhams and Bonhams catalog that was sign "Fenno," which enabled her to identify the artist as being Louis Fenno, a Ute painter who passed on in 1903 (Dobrzynski).

Traditionally many artists did not sign their works. The Western notions of the lone artist superstar doesn’t translate well to Native American art world, and I can’t imagine an Indian Damien Hirst. For the most part, friends and family keep people’s egos in check; however, attributing art is good because it humanizes the work. For most of last four centuries, Western collectors and others have exoticized Native American art, so the pendulum swinging towards humanity is a great thing.

DAM doesn’t throw out the baby with the bathwater: directly after the artists’ name, when known, is their tribal affiliation, then date (Macmillan). They provide contextualizing information about the subject matter and the piece’s provenance — telling the stories that draw in viewer’s who might have minimal experience with Native art.

Ironically on the subject of attribution, the New York Times mistakenly gave the wrong name for the current president of NAASA, Karen Kramer Russell. But this illustrates that it’s better to try, and some mistakes on the way that can be corrected, than not even make the effort. Scholars are other institutions have been able to attribute art even back to the 18th century.

Congratulations to the Denver Art Museum on their two new Native galleries and kudos and thanks to the art writers for bring Native American art issues to the reading public.

Here's another interesting article about the Denver Art Museum and other major Native art institutions from the Wall Street Journal: "Shows That Defy Stereotypes" by Lee Rosenbaum.

Nancy Rosenblum's quote is simple, elegant, and speak volumes: "Everything in this gallery was new when it was made... I didn't want to separate prehistoric from historic from contemporary."